Meetings dominate our workplace and yet they receive unanimous hate all around.

According to a recent HBR IdeaCast interview with Steven Rogelberg, a professor at UNC Charlotte, “30% to 50% of the hours we spend in meetings aren’t productive. 73% of people admit to doing other work during meetings; 90% report daydreaming. And 64% to 65% of managers say meetings keep them from work and deep thinking.”

Do meetings really have to be that bad?

Meetings exist for a reason – because face-to-face interaction is necessary for optimal decision making in the workplace. The problem is that meetings have not evolved with time. While we are busy preparing for artificial intelligence (AI) to change the Future of Work, we still rely on the same archaic meeting formats that our grandfathers used in their time. And instead of optimising our time at meetings and leaving space for deep work and critical thinking, research shows that the average time spent in meetings weekly has increased from 10 hours in the 1960s to 23 hours now.

While there’s so much said and written about how to make meetings better, the pursuit of improving meetings has become overwhelming. Let’s start by just introducing 3 simple frameworks to make the meetings we have more fruitful.

1. Decide if you need a meeting

The first step to improving your meeting quality is to first decide if there’s a need for one at all. The reason we have so many bad meetings is because most meetings could have been an email, an internal documentation, a Google form or a live poll.

With the brilliant technologies we have in place today, there are so many ways to get a status update, reach consensus, or brainstorm ideas, without disruptive everyone’s workflow with a meeting.

So, before you send out a Google Invite, think about whether you really need that meeting. Consider other creative ways to achieve your objective instead. If it helps, take a look at this clever flow chart by Atlassian to decide if you should fight the urge to call for a meeting. 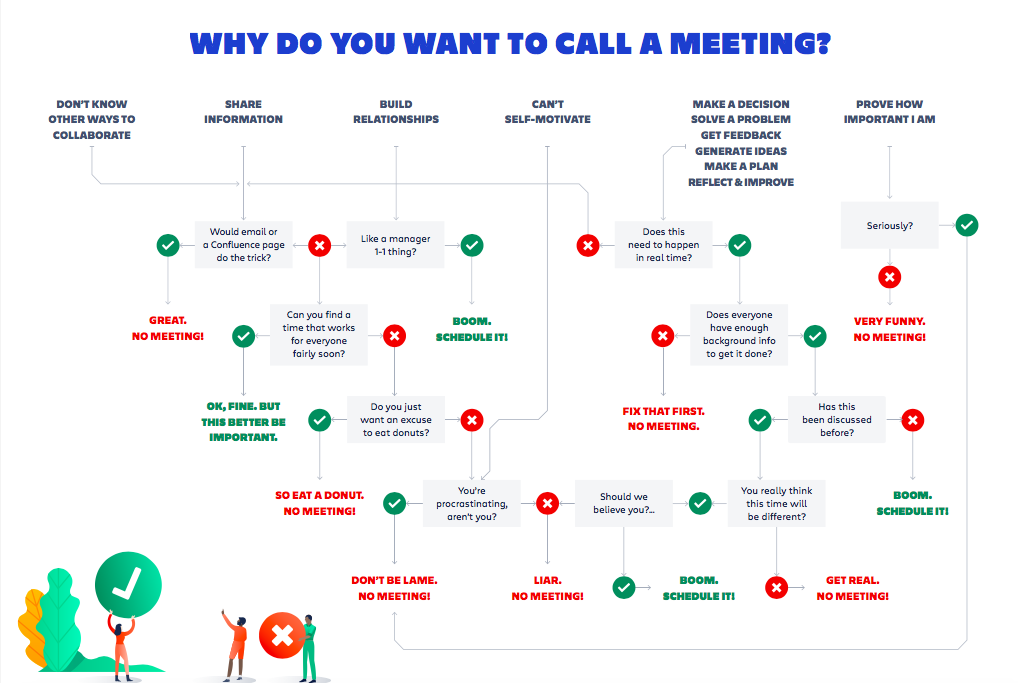 2. Set and communicate clearly, the purpose and limits of the meeting

Once you decide that a meeting is truly necessary, set aside some time to get clear about its purpose. While most companies practice sending out agenda, it’s the lack of clarity that lets the discussion get derailed.

Communicating clear guidelines and expected outcomes for a meeting helps to inform attendees on what to prepare for so everyone comes in with the right frame of mind.

Think of what you want to achieve by the end of the meeting and summarise that into a one-liner:

Feel free to rewrite it until you are clear about the purpose. When you have a clear idea on why you’re calling for a meeting, you will be able to better guide the group to achieve that outcome.

Practice writing a clear agenda for the meeting. In the HBR IdeaCast interview, Dr. Rosselberg advises that “by creating your agendas as a set of questions to be answered, you tend to engage in much deeper thought. You just can’t help it because it’s a more cognitive activity.”

By thinking about the questions you want answered at the end of the meeting, you also get a better sense of who really needs to be present in the meeting. It also gives you a clear idea of when to end the meeting and if the meeting was successful at all.

Meetings often get side-tracked because it’s easy to bring related topics into the conversation that don’t add value to the discussion at that point of time.

Once you have decided on what you want to cover in the meeting, it’s crucial to clearly state what you won’t be discussing. This ensures that meeting stays focused and achieves its purpose.

b. Number of people

There’s a golden number for productive meetings even with trained facilitators, and that number is 8. Even then it’s a stretch for certain meetings.

Heard of the saying too many cooks spoil the soup? That’s exactly what happens in meetings. When you’re trying to make a decision, having too many people at the table can defeat the purpose of the meeting. The table below (by McKinsey), provides a good number guide on how many people to invite to a meeting depending on the meeting type.

If your meeting absolutely needs to involve a large number of people, it’s strongly recommended that you introduce a good audience engagement technology into your arsenal.

Where consensus is needed, it’s a lot more efficient to get people to vote on their decision instead of going around the table asking for opinions. If you need everyone’s input, there’s a way of getting all the content displayed synchronously, instead of taking turns and dragging out the meeting.

The best meetings are short meetings. Why?

Dr. Rogelberg highlights that meetings tend to obey Parkinson’s law, such that they expand to fill time. So if you allocate two hours for a meeting, you better believe that it’s going to take up the whole two hours. The illusion of having ample time allows inefficiencies to set in naturally - people tend to explain themselves more, it becomes okay to come in a few minutes later or to start setting up after the meeting has begun.

Give some thought to how much time the discussion really needs to take place and allocate just enough time to cover that. Provide enough information so everyone comes in prepared.

Are you expecting to make a decision or reach a conclusion by the end of the meeting? If so, clearly state what decision you want to achieve ahead of time. And that should become the north star of your meeting.

3. Guide a structured discussion with clear intent and purpose

The GROW framework, which was initially designed for coaching by Sir John Whitmore and colleagues in the 1980s, is excellent in providing structure to meetings and guiding organised discussions.

Set the goal of the meeting right at the start. Depending on the meeting, it can be a topic and objective for the discussion or a review.

When setting this goal, use SMART (Specific, Measurable, Actionable, Realistic, and Time-specific) principle to make it as specific as possible. You should also use the guiding questions you wrote into your agenda to help set this goal.

Then, ground the discussion with the reality you are facing. Lay out your current situation and status to define the parameters of your discussion. Invite an objective assessment of the situation.

Explore the options that are available to you at that point. Use questions to help everyone in the meeting realise the different options available to them.

Make use of brainstorming and voting tools like Pigeonhole Live to display the options available and let all meeting participants vote on them to reach a consensus.

This step is a crucial point in making a meeting effective. As highlighted in the interview with Dr Rogelberg, one of the biggest problems with bad meetings is that they end with no purpose and the attendees have no clue about what was decided.

As a final step of the meeting, set concrete steps moving forward. Discuss specific actionables that you can take to address the issue discussed earlier, brainstorm the possible challenges of each action point and discuss ways to overcome them. Then, assign stakeholders in charge of each task and make commitments to follow up on the action plan.