Boosting employee engagement at company town halls are a tricky business. Even so, because most companies are still making this same mistake.

A director addresses his company at their annual town hall meeting. He outlines the company’s goal for the year, and how management has decided to reach that goal. He opens the floor for questions, and one hand shoots up in a crowd. It’s a bright-eyed bushy-tailed junior executive (let’s call him Rick) eager to contribute.

“I have a suggestion,” Rick asks. He proceeds to share his idea to reach that same goal. It’s a bad idea.

The director recognises that. “Yeah, that’s obviously not going to work,” he replies. He starts to list out all the reasons why it doesn’t work for the next 10 minutes.

This may seem like a harmless situation on the surface, but what happens next is simple.

Rick is going to shut up and sit down and never raise another suggestion again. And his response is very natural. He has been taught, by the reaction of the director and the subsequent social embarrassment that he will face after the town hall is over, that providing suggestions have consequences.

No one else contributes any suggestions for the rest of the company town hall. They break for lunch and the director thinks: “Only one person spoke up. That’s disappointing.”

We’ve all seen or experienced a moment like this. Though not as dramatic or rude, we have experienced leadership shoot down ideas immediately after the idea leaves our mouths.

“That’s not a good solution.”

“We’re not going to deviate from this approach.”

“My problem with your solution is this.”

“That is a ridiculous solution you just suggested.”

All these phrases vary in severity, but they all share one thing -- suggestion are shot down immediately.

This needs to stop. Shooting down an employee's suggestion immediately shuts the conversation down.

It’s like that frustrating lunch-time conversation you always end up having:

The director’s tone and choice of words also make a difference. He’s suggesting that Rick should have known better, and schooling him on his gaps of knowledge about the company in front of the whole company.

Rick is new to the company, so the gaps in his understanding are expected. But having them pointed out to all his colleagues, seniors, and managers can be mortifying.

If you want employees to speak up, the first step is to build a safe space to speak up. But that doesn’t simply mean holding workshops or setting up feedback channels.

If you want employees to speak up, first build a safe space to speak up.

That means managing the rewards and consequences of speaking up.

In these company interactions, the rewards and consequences here aren’t monetary, they’re intrinsic. Rick’s embarrassment may not be quantifiable, but it is enough to make repeating that same action undesirable.

If director had instead said: “Thanks for speaking up! We have considered that option, but decided that this is the better approach. In the interest of time, I won’t go into details now, but if you want to find out more, feel free to come by my office next time.”

The equation changes to this:

Of course, Rick’s reaction, and the reaction of everyone watching, differs from company to company. The cultural background of the team and the personality of employees make a difference in how comfortable people can be with authority figures and speaking up.

So how do you master responding to bad ideas at town halls? The best approach hinges on one key belief:

All ideas matter. Even the bad ones.

In other words - the more bad ideas you have, the more good ideas you’ll have.

If the director saw Rick’s bad idea not as a waste of time, but as a stepping stone to many good ideas, his reaction to him would be very different. His first reaction wouldn’t be to point out his mistake. Instead, he would be driven to acknowledge his contribution and encourage others to follow his example.

Rick's colleague Nick has a suggestion he wants to share as well. But instead of raising his hand at the company town hall, he makes use of the audience interaction tool that their company had employed to support their town hall. They have a dedicated open-ended poll open just for suggestions, and he's encouraged by the many other suggestions he see there.

He decides to share his suggestion anonymously. By not sharing his name, Nick side-steps the possible embarrassment of having his idea shot down in front of all his colleagues. The consequences are minimised. He would be emboldened to share his thoughts, however crazy they may seem.

If his colleagues upvotes that idea, or if the director addresses his suggestions on stage, silent contributors like Nick get the encouragement they need to continue sharing their ideas. He is rewarded for his contributions, despite being anonymous.

One day, he might pluck up the courage to pick up the mic as Rick had and share his ideas out loud. 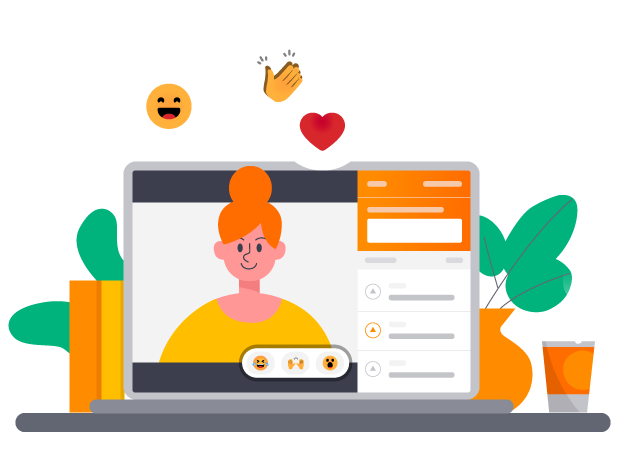 Raise the energy in your virtual events with live reactions