With a combined total of about 25,000 square kilometres of British Columbia (BC) destroyed in flames and more than 68,000 people forced out of their homes in 2017 and 2018, the BC region is fighting a fierce battle with climate change.

The Northern Conference for Wildfire Resilience (NCWR) was established to develop policies and practices that mitigate the catastrophic effects of the warmer, drier weather facing the region in the coming years. The conference aimed to bring together community leaders and experts in a collective effort to build wildfire resilience.

Given that the NCWR was an unprecedented effort, there were concerns and challenges for the organisers. To solve these problems, they turned to Pigeonhole Live.

“Pigeonhole Live really supported the composed, professional question periods that we were going for. We felt going into it that using Pigeonhole Live was a calculated risk – it’s a technology that was new to all of us. But it was very easy to learn how to run, and the participants caught onto its use quickly.”

Main challenges of the NCWR

Secondly, the topic of the conference is a sensitive one and this posed one of the biggest challenges to the organisers. As many residents of the Burn Lake area were personally impacted by the incidents of the wildfire, it was crucial to remain sensitive to their plight.

Lastly, given that the conference spanned over three days, it was crucial to keep the participant energy levels up and consistent while staying on schedule.

Bringing the conference goals to fruition with Pigeonhole Live

Bringing together the perspectives of different participant groups was crucial to ultimately come up with a sustainable solution to the region’s wildfire problem. To promote this goal, the organisers wanted to create a safe space for honest conversations to take place in the NCWR. They wanted participants to have the opportunity to ask questions and clarification from the speakers and not feel intimidated to offer their opinions.

“We wanted to create a space that didn’t feel intimidating asking questions: going up to a microphone is not easy for everyone! We also felt that the ‘voting’ of questions would be a professional approach.”

With Pigeonhole Live, the organisers were able to successfully achieve this goal. They started the conference by using Pigeonhole Live only during panel discussions. As the participants could easily submit and vote on questions using their mobile devices, everyone was actively involved in the discussion. The organisers also found having the questions displayed on the big screen in real-time helped in keeping the participants’ interest on the podium.

As Pigeonhole Live was able to capture the diversity of opinions and bring about in-depth conversations during the panel sessions, the organisers decided to expand the use of the platform to every presentation.

In order to meet the conference’s goal of devising sustainable policies and practices, collaboration and knowledge-sharing between the different parties needed to be at the forefront of the conference. 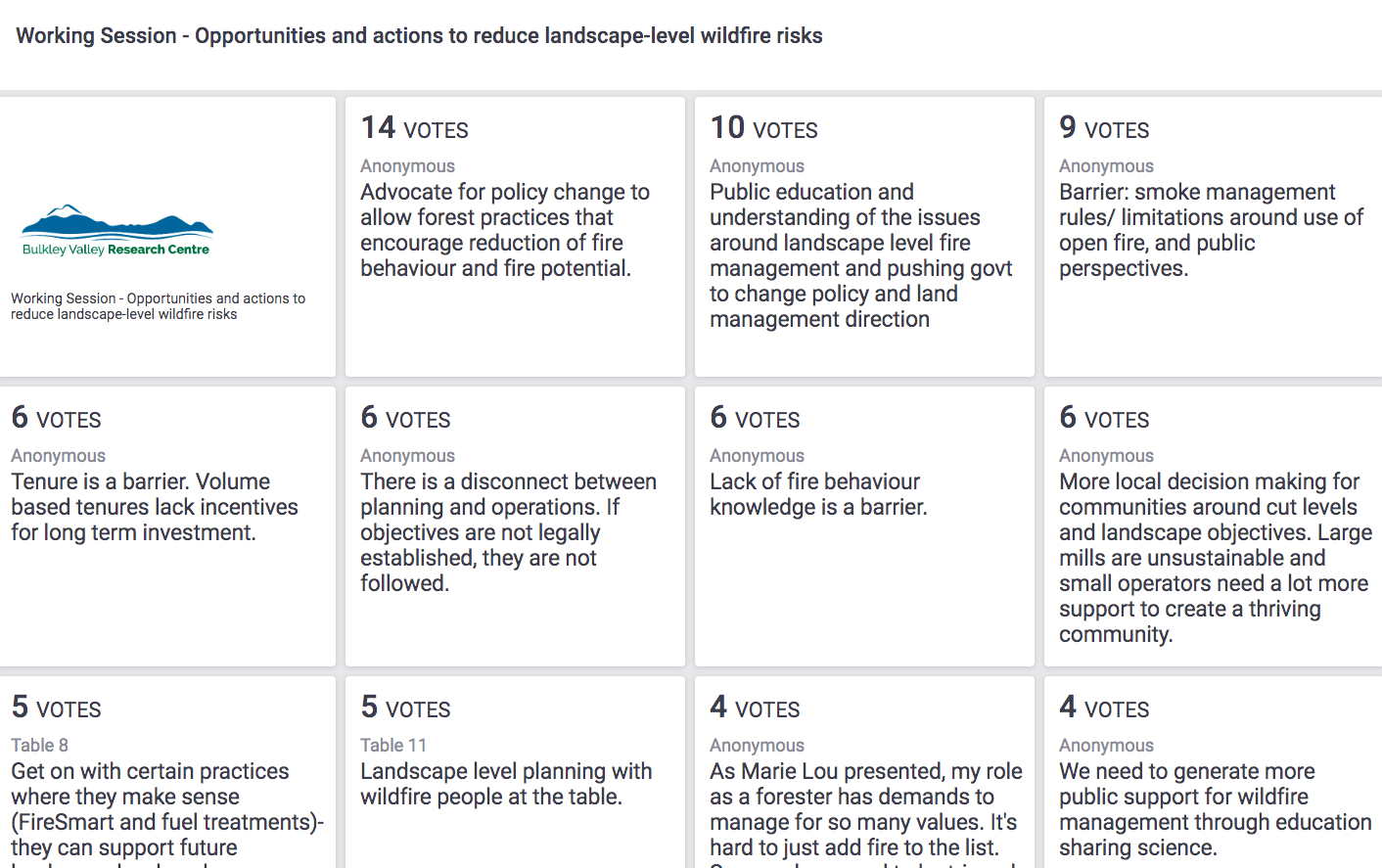 Pigeonhole Live was integral in facilitating the collaboration of the three separate Working Groups held in the conference. Working Groups were sessions where participants led group discussions on the conference themes. The organisers set up an Open-ended Poll on Pigeonhole Live for participants who were interested in leading discussions to submit their topics on. The submissions were then reflected on the projector screen in real-time. This made it easy for facilitators to direct the participants to the group discussions based on their topic of interest.

Enabling a thoughtful and reflective conversations

It was important that the conversations that took place were thoughtful and reflective so as to capture salient themes while remaining sensitive to the plight of the victims of the wildfire.

Questions and votes by the audience on Pigeonhole Live’s audience interface are instantly reflected on the projector screen for the audience and speakers to see. According to the speakers, having the questions available on the big screen during panel sessions and presentations provided them with enough time to reflect on the questions before answering them and made it open for discussion by all panel members.

“We received feedback from one of our speakers that from his perspective, who said that it was the first conference he has spoken at that he did not feel rushed responding during the Q&A period – as the question was up to read and reflect on, and created an atmosphere where all of the panel speakers could have almost a conversation over the question during the Q&A.”

The organisers were also able to change the order of some questions to allow each panellist the opportunity to speak to ensure balance in the sessions. Instead of having one speaker address a question while the others wait, Pigeonhole Live allowed every question to start a conversation among the panellist. This helped them guide a more dynamic and well-rounded discussion, instead of sticking to a static question and answer format.

Keeping the audience engaged throughout the conference

Keeping the participants engaged throughout each speaker session and panel discussion and in between was essential in keeping their energy levels up throughout the three-day conference.

Pigeonhole Live provided the organisers with many options to keep engagement levels up and tailor the conference to the participants.

While the live Q&A kept the audience engaged during speakers sessions, organisers were also able to engage the audience before and after the sessions using Live Polls. Fun opening polls such as “How far did you travel to get to this conference?” before sessions helped lighten the mood of the conference and keep audience energy up. 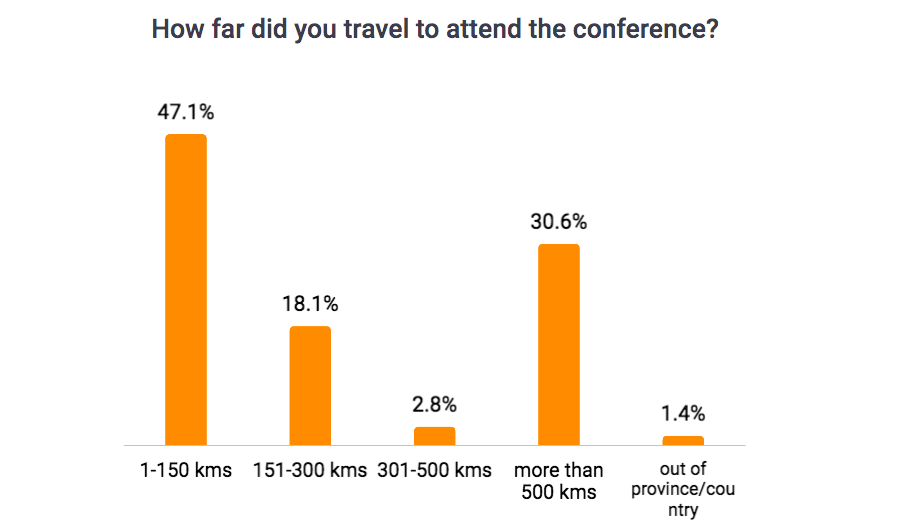 The organisers also set up several Open-ended Poll to gather questions and suggestions that were not relevant to each session but did pertain to the overall interactions in the conference.

Through these additional polls, the organisers felt that they were able to really tailor the conference experience to the attendees’ needs and interests. For instance, in response to a suggestion that came up in the "General Questions" poll, the organisers circulated a sign-up sheet for participants who wanted to share their contact information with others for networking purposes. Conference organiser Sheena Briggs said, “We felt that this helped people to feel heard and network.”

The organisers envisioned NCWR to be a professional and respectful space where stakeholders could come together to brainstorm a solution to the wildfire problem and Pigeonhole Live complemented this ideal.

As the organising committee said, “Pigeonhole Live really supported the composed, professional question periods that we were going for. We felt going into it that using Pigeonhole Live was a calculated risk – it’s a technology that was new to all of us. But it was very easy to learn how to run, and the participants caught onto its use quickly.” 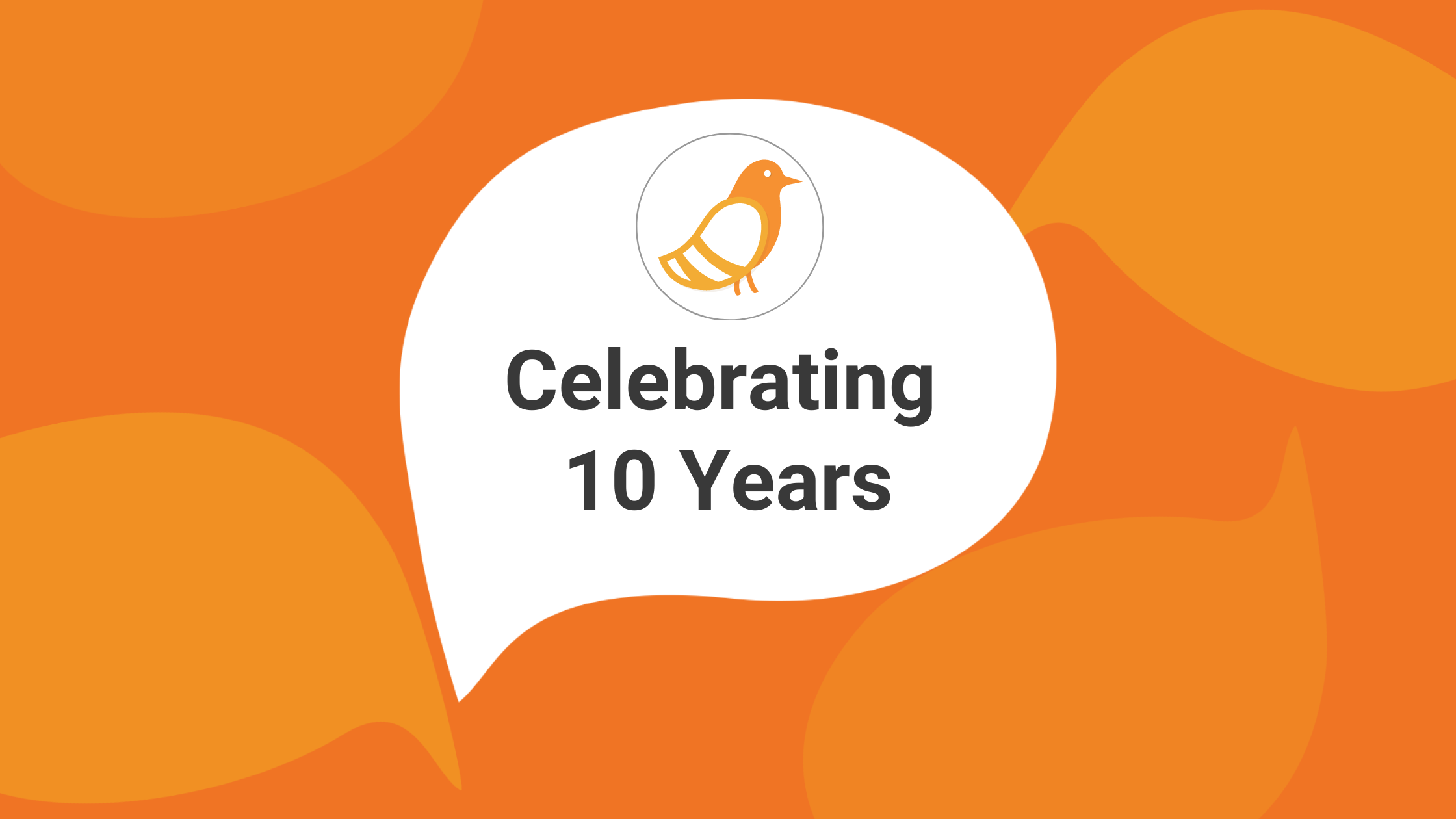